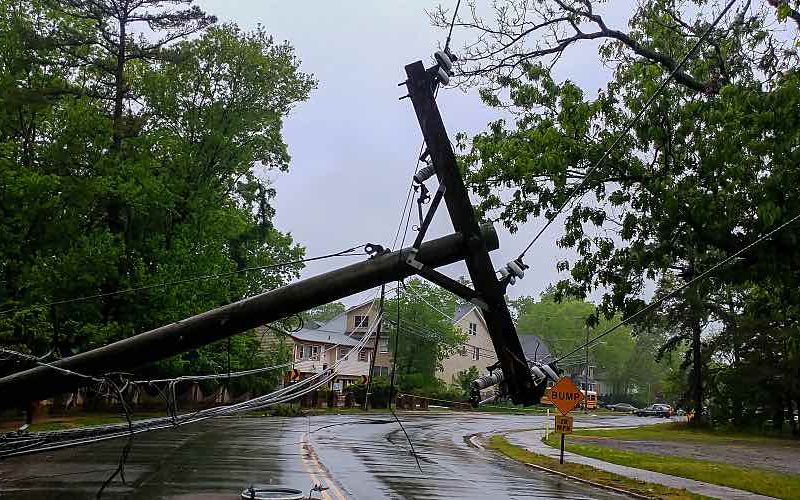 On September 28, 2022, Hurricane Ian made landfall on the southwest Florida coast. A Category 4 storm, it brought winds of 105 mph, a deluge of rain, and a storm surge that mounted to 13 feet in the city of Fort Myers. The surge spread warm, brackish water through homes, businesses, sewers, septic tanks, and wastewater facilities in the area.

Stormwater, sewage discharge, and large quantities of debris flooded waterways in Florida. In fact, the plumes of runoff leaving southwest Florida after Hurricane Ian could be seen from outer space, according to the Tampa Bay Times.

And the impacts don't end when the water disappears. Storms like Hurricane Ian can threaten water quality for months. That's not surprising given what was happening on the ground during Ian—wastewater spilling into watersheds, rising groundwater entering cracks in sewage pipes, and backup generators failing at lift stations.

How do storms like Ian degrade water quality and threaten human and environmental health? Let's take a closer look at hurricanes, their changing dynamics, the impacts they have on water quality, and how test labs can help safeguard water.

Since 1900, the frequency of hurricanes making landfall in the United States has not increased, according to the Environmental Defense Fund (EDF), but storm severity has intensified. Storms that rapidly escalate—increasing 60 mph or more in 24 hours—may be due to warmer sea-surface temperatures brought about by climate change.

So far, normal climate variations can explain most changes in hurricanes. The warming climate results in hurricanes with stronger winds, higher storm surges, and record rainfalls, EDF says. That explains why storms have become more destructive and costly in recent years.

Where hurricanes hit, flooding is the main concern—and the major contributor to degraded water quality. Climate change will likely make that worse. This means it's more important than ever for your water testing lab and water facilities to have an emergency response plan.

For example, more than 690 wastewater and drinking water utilities in 11 states were compromised as a result of Hurricane Sandy in 2012. The Environmental Protection Agency (EPA) estimated that more than 1,220 drinking water systems and 200 wastewater treatment facilities were affected after Hurricane Katrina in 2005. The lack of safe water caused a large outbreak of gastrointestinal diseases.

Threat to Human and Environmental Health

If floodwaters contained only rain, there would be much less concern about how they affect water quality. But the waters include sewage, sediment, toxic chemicals, gasoline and diesel, and heavy metals—along with decomposing plants and animals, animal fecal matter, and anything else swept up during the storm. These all threaten human and environmental health.

For example, agricultural runoff often includes pesticides and fertilizers that flow into freshwater sources. Manure from cows, pigs, and other livestock can wash into water bodies. Nitrates are linked to health problems including blue baby syndrome and cancer, according to the National Library of Medicine, and bacteria like E. coli and salmonella cause gastrointestinal distress. Contaminated water can also carry diseases such as cholera, hepatitis, and dysentery.

Toxins from factories and industrial processes also infiltrate floodwaters and can cause acute poisoning, according to the Centers for Disease Control and Prevention. Coal ash waste from power plants often contains cancer-causing compounds like arsenic, chromium, and mercury.

In addition, during storms, rain-saturated soils and high winds fell many trees. Once in the waterways, the decaying green foliage can create spikes in bacteria and nutrient loads. These increases can lead to crashes in dissolved oxygen, which is critical to the survival of fish and other aquatic organisms.

Storms also cause infrastructure damage and power outages, which can shut down water treatment plants. Loss of electric power means no way to pump, process, or treat raw water and wastewater. Although plants usually have backup generators, fueling them 24/7 can be a challenge. While the plant is down, chemicals, toxins, and debris may flow unchecked into the public water system. And that assumes sewage treatment facilities aren't damaged so seriously that they won't be able to come back online.

If water pipes break, contamination can seep into water mains and lines and individual households, along with wells used for drinking water. Water pumps may not have enough power to operate effectively, creating low water pressure or none at all.

After a hurricane or severe storm, the work of water testing labs is more critical than ever to ensure toxic chemicals and harmful bacteria have not contaminated supply sources, pipes, and plants. Testing may encompass water quality metrics for both human and environmental health, including levels of nitrogen and phosphorous, fecal bacteria, phytoplankton, and industrial pollutants. Water labs play a key role in assuring the community that the watershed is healing, systems are back on track, and water is safe to use and drink.

How to Create a Culture of Safety in Your Water Lab

How to Create a Culture of Safety in Your Water Lab

Diana Kightlinger is an experienced journalist, copywriter, and blogger for science, technology, and medical organizations. She writes frequently for Fortune 500 corporate clients but also has a passion for explaining scientific research, raising awareness of issues, and targeting positive outcomes for people and communities. Diana holds master’s degrees in environmental science and journalism.